Hi again, welcome back to the blog!

Now you know that Every Breath is a crime thriller, right?  It features a character called Rachel Watts, an ex-rural sheep cockie and her eccentric seventeen-year-old neighbour, James Mycroft.  When Mycroft asks her to help him solve a murder near the Melbourne zoo, Rachel becomes his reluctant ‘Girl Watson’.  Together they race to find the killer, and a trip to the zoo will never have quite the same meaning again…

Mycroft has a passion for forensics – it’s an integral part of his quirky Sherlockian character. 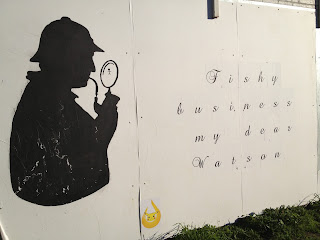 But how exactly does one develop a ‘passion for forensics’?  And what does having such a passion entail?

Well today’s very special guest might be able to shed some light on this.

Dr Shelley Robertson is a former senior forensic pathologist with the Victorian Institute of Forensic Medicine, and she’s been kind enough to visit here today and answer a few questions about forensics, pathology, and other homicide-related things.  Please give Shelley a very warm welcome!

Thanks for dropping by to visit, Shelley!  How’s it going over your neck of the woods?

Could you tell us a little bit about the kind of work you do?

Well, when working for the VIFM, a large proportion of my work was performing medico-legal death investigations which included post-mortem examinations, autopsies, reviewing medical information and other evidence relating to sudden, unexpected deaths and compiling reports for the State Coroner , the police and justice departments.   Now I run a consulting business giving expert opinions in cases which may ultimately be used in court.

Helen Garner wrote a famous article about the Melbourne morgue, in which some of the pathologists she interviews are quite young – in their very early twenties.  In Every Breath, the character of Mycroft is only seventeen, but he’s already had an interest in forensics for some time.  Is forensic pathology something that trainees often come to early, do you think? What drew your interest to forensic pathology in the first place?

Forensic pathologists are generally a bit older than that, but at the VIFM, there were often medical students and trainees around which may have given Ms Garner a false impression.  I just thought it would be an interesting thing to do rather than spending my time peering down a microscope in a hospital laboratory.

And I know that there are many different branches of forensics (including forensic chemistry, forensic engineering etc), but pathology focuses on determining the cause of death and the pathological process that leads to death.  What kind of training do you undertake to work as a forensic pathologist?  Do you have to be a medical doctor to work in the field?

Yes, in order to be a forensic pathologist, one needs a basic medical degree.  Then one has to obtain Specialist qualifications in Pathology.

So I imagine that to work in this field you’d have to have quite a strong stomach…and a lot of empathy.

I don’t know that a ‘strong stomach’ as such is required.  Most doctors don’t have a fit of the vapours at the sight of blood.  One does learn to be fairly resilient to bad smells and terrible sights but I think that is all part of the practice of medicine.  Forensic pathologists may have limited contact with family members and others related to a deceased person, so empathy may not necessarily be a dominant characteristic.

What’s an average working day like for a forensic pathologist?  Could you give us a bit of an idea what a normal day might involve?

A typical day may involve performing several autopsies followed by paperwork, completing microscopic investigation of previous autopsies, writing reports.  Some days involve court appearances, that is, being questioned in the witness box by both Prosecution and Defence in murder trials, or teaching at university.

In Every Breath, Mycroft and Rachel stumble upon the scene of a homicide.  Do forensic pathologists sometimes work outside the lab, examining the scene of the crime?

Yes, forensic pathologists may attend crime scenes at the request of attending police or the coroner.

Now I know that in my research for Every Breath I discovered a few things about real-life forensic pathology that made me understand how fictional detectives sometimes get it all wrong – like the fact that autopsy results can take 6-10 weeks to come back (in CSI, they make it seem like it happens overnight!).  What are some of the most glaring differences between real-life forensics and fictional forensics?

I think that you have picked the most glaring difference, that is overnight versus 6-10 weeks and not just the autopsy result, also things like toxicology results, DNA testing.

So does it detract from your own enjoyment of literary and television depictions of forensic pathology, when they don’t get the details right?

Yes, I much prefer shows like ‘Midsommer Murders’ where there is limited nasty forensic stuff.

And for any of our readers out there who are interested in pursuing ‘a passion for forensics’ – any words of advice?

Go and talk to some real people actually doing the job, don’t just rely on the media.

Shelley, you’ve been very generous agreeing to come on the blog, so thank you!

And now is the part when I let you all know what’s been happening, and what’s coming up.  Well, it’s been a bit of a whirlwind week, not the least because I received my first author copy! 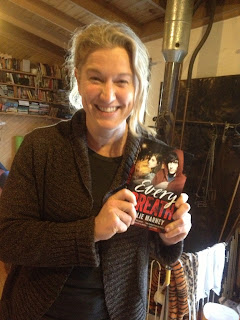 Yep, that’s me, looking extremely happy!  I think if I was smiling any harder, my face would bust :)  But seriously, it’s been a long journey to this point, and it’s incredible to finally have a finished copy of Every Breath in my hot little hands…  I’m very aware too, at the moment, of how many people have contributed to the making of the book, and getting it to this point.  I’m feeling full of gratitude right now, and I hope I remember to thank everyone on the launch night…

Speaking of launch nights – I’m getting in early to let people know that Every Breath will be launched in Melbourne at Readings Carlton on Thursday 12 September at 6.30pm.  The convenor of Sisters in Crime, Carmel Shute, will be launching the book into the world.  Drinks and nibbles will be on hand, and also some balloons may be involved…or something else suitably celebratory!  I’ll be sending out a big invite soon, so keep an eye out.

There will also be a Launch Party for Every Breath locally, in Castlemaine, on Friday 20 September at 6pm at the Castlemaine Library.  Hostess with the Mostest, Robyn Annear, will be MCing proceedings.  There will be food and drinks, music, books on sale courtesy of Stoneman’s Bookroom, as well as readings and giveaways.  I’m also toying with the idea of inviting people to come dressed as their favourite detective…  Anyway, basically it’ll be a night to remember, so please, if you’re around the traps, drop by and say hello!

PS: and thanks to the wonderful artists who created the Sherlock image on the wall of 'She Sells Seafood' in Castlemaine - I don't know who you are, but all kudos to you!