What a strange and incredible day!

I signed my first autograph today, for a friend.  That was quite weird.  The best advice about this I got from LeeFox, who said ‘don’t use the same signature for autographs that you use on your credit card’ which seems like pretty sound advice, I have to say.

I also got my cover proofs today, which made it a very special day from the get-go. 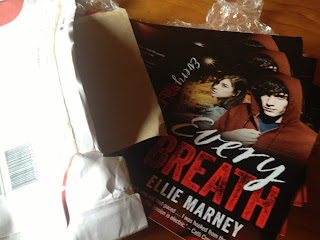 Knowing that your words are turning into a real live actual book is strange in itself.  I mean, you think about it, you dream about it, and you plan for it to happen…  I know that Every Breath is about to go out into the world, and boxes of books will soon be unpacked in shops and things – I did go through a rather exhaustive editing and copy-editing process after all.  And yet I still can’t get my head around it.

When you start to see the evidence that it IS actually happening, like cover proofs, it still seems so odd, somehow divorced from reality.  People say, ‘aren’t you excited!’, and yes, I am excited, but also sort of confused, in a ‘how did this come about?’ way.

So this is where I’m at right now, at the blinking-in-surprise stage (which is curiously like the ‘first getting signed’ stage), as the arrival of advance copies becomes imminent and it starts to fall on your head that wow, yes, this is ALL REAL.

The other thing that happened was that I went to see GraemeSimsion, author of The Rosie Project, speak at the Castlemaine Library tonight, and holy crap, that guy has had an incredible ride.  Seriously – he didn’t even start writing until five years ago.  He wrote a book in seven weeks, people.  A whole book.  It won the Vic Premier’s Unpublished Manuscript Award, straight off the bat.  Then it went nuclear, and was sold to 39 countries, or some insane number like that, and now he’s on his way to the US to talk about writing the screenplay for the film production…

I mean, the whole thing just sounds awesome, and even he himself talks about it in this ‘omg, this is so cool!!’ way that made me just want to congratulate him over and over.

But Graeme Simsion did the hard yards – he worked away on that original screenplay-that-became-a-book for five years.  He binned whole plotlines, whole characters.  He read his writing manuals.  And above all, he clocked in his hours – that 10,000 hours or something that sorts the wheat from the chaff when it comes to writers.  So he’s worked bloody hard for this success.

And what I loved about hearing him talk, what really resonated, was that he still has this sense of wonder about it all, the whole process.  He still seems slightly flabbergasted by his success.  Proud, yknow?  But surprised all the same, with this lovely conspiratorial laugh, and this enormous look of wonderment.  He was like ‘can you believe it? THIRTY-NINE COUNTRIES!!!’, and I was sitting in the audience, just grinning my head off (‘omg, that happens!’) and just hearting him so bad!

And I really get that today: that feeling of almost child-like incredulity that yes, this is really real.  Although I think I have more of a stunned-mullet look on my face when people ask me about it (probably because Graeme Simsion has had a lot more practise at being asked about his book and talking about it and so forth).

So if you see me kind of wandering around in a bit of a spin, or if you talk to me about the book and I just nod my head vaguely like ‘oh yeah, that’, it’s not that I’m not excited – I totally am!  It’s just that it still seems rather like something that’s happening on Mars, or to somebody else way cooler than me.  And thank you, in advance, for your understanding J

Oh, there was one more thing that happened!

On my way to seeing Graeme Simsion at the Library, a fox dashed across the road in front of my car.  This happens sometimes.  But it always gives me a little thrill, because…a fox!  That sneaky bugger!  I know I should loathe foxes, because they do so much damage around this time, with the lambing season.  But…I can’t hate them.  Foxes are tricky and clever and wild, and that sudden flash of russet red always reminds me that sneaky surprising things happen – they happen when you least expect.  Wild luck sometimes strikes you from nowhere.

I took it as a good omen.

Have a great week.