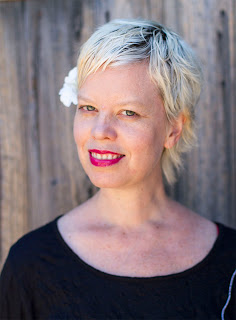 Another blog post, another wonderful guest!  Today I’ve persuaded Castlemaine’s own Kirsten Krauth to give us a visit.  Kirsten and I knocked knees together during our very first author readings, and now Kirsten’s debut novel just_a_girl has recently been released by UWAP.  Set on the outskirts of Sydney, it’s the strange and sultry story of Layla.

Layla may be only 14, but she’s grown up fast.  She does a lot of things online that she probably shouldn’t.  Her mum has her own problems to deal with, plus she’s a bit church-obsessed.  Layla is figuring things out on her own, and she’s a quick study.  And somewhere else in the city, a man is packing his lover into a suitcase…

Just_a_girl is an adult novel that looks into the heart of teenage life, its darkness and light, and it’s filled with beautiful language that made me drool a little.  So now I’d like you to give a warm welcome to the very talented Kirsten Krauth!!

Kirsten – hey there, how’re you going?  You’ve been a writer and blogger for some time, but what’s it like now, being a fully fledged author?

It’s a big step. It feels different having your book out in the world. Very exciting to receive that little package in the mail. It’s kind of like being pregnant. You don’t really believe you’re going to have a baby, until you have a baby! I have the book on top of the huge pile of books next to my bed. It’s nice to look at when I wake up.

Now here’s the question that seems to be compulsory for every writer – which is it, plotter or pantser?

Definitely a pantser. For this first novel, I was learning, so I started out just concentrating on voice (Layla’s). I wrote paragraphs, playing with words. Gradually the paragraphs started to merge, new characters were born, and connections were made. I don’t know where the characters are taking me, and it’s one of the joys of writing, to find that out. I like seeing the shape of the novel emerge slowly. I concentrate on structure and plotting in later drafts.

Just_a_girl is pitched as an adult novel, but your protagonist is 14.  What were the challenges of writing from a teenage perspective?  Did you find yourself doing a lot of eavesdropping and observing to research the way teenager’s behave and talk?

Layla’s voice had real resonance with me. I find 14 year olds endlessly fascinating and she was the easiest character in the book to write. This is because Layla is on the cusp, in so many ways. She is full of contradictions: sexual but naïve; angry but vulnerable; passionate but evasive. I think I am always drawn to teenagers as they often see themselves as outsiders looking in, trying to work out the world. I think most writers see themselves that way too! The challenge with writing from a teen perspective is you have to hold onto that naiveté, and remember how much they don’t yet know. With Layla, her style is very distinctive. Short, sharp, disjoined sentences. Often not grammatically correct. So it was important to keep that consistent.

I used to commute between Springwood (where the novel is set) and Kings Cross in Sydney for four hours a day. It gave me a lot of time to listen to girls on the train. I was surprised by how much they revealed to each other and all of us listening (and questioned quietly how much of it was true). I used to note things down. I also spent a fair bit of time on Facebook seeing how young girls communicated there…

What prompted you to write just_a_girl in the first place?  How did it all start to come together?

I had a few ideas about Layla (she originally started as a hypertext fiction created for the internet, which is why she is so jumpy!) and took them to university where I did a research masters in creative writing. My supervisor Sue Woolfe was a fantastic encouragement and I had a shorter version of the novel by the time I completed my degree.

So much of teenage life is conducted online now – chatting with mates, arranging events, acquiring knowledge, even hooking up – and it’s all conducted in full public view.  Everything you do is out there, like you’ve taken out a half-page ad in the paper.  And yet the responsible adults are often a bit oblivious, because they’re not as connected with or informed about the technology.  It struck me that just_a_girl highlights this idea really well – the existence of a secret life, conducted in public.  Was this something that you noticed too, as you were pulling all the threads of the novel together?

Yes, yes, yes. I actually set out on the book with this theme in mind. It continues to occupy me. I was interested originally in the impact of digital technologies on people’s lives, family, parenting, teenagers. What could a teenager do in her bedroom that I couldn’t when I was that age? If she could chat with a stranger (who could find out a lot about her online and gear the conversation around certain things), and then organise to meet him in another town, that’s a pretty big shift! Then when I told people about my novel and ideas, stories just poured out. Of young people discovered doing the most secretive and scary things. One sticks in my mind, a young boy who was selling naked images of himself. His mother only found out when she discovered his bank account had thousands of dollars.

I think you’ve just given me a great line for the book … ‘a secret life, conducted in public’. Can I use it?  (Sure! – go for your life!)

As a parent yourself, though, do you find it a bit unnerving?  Or is this just normal for teenagers now, and do adults need to get over it (or get with the program)?

As a parent (of two young children) I’ve been dwelling on these ideas a lot. How do you control your children’s access to technology, when they are so desperate to keep up and fit in? Is it possible when most parents (and teachers) know less about technology than the children do? I have always been interested in computers and communications so I try to keep up with it. I think all use can be moderated to some extent. If kids are going to use iPads, laptops, they need to do it in family areas, with parental supervision. And they need to switch off too. With mobiles, it’s more difficult. I’m sure as my kids reach their teens, technologies will have changed rapidly again, so I’ll have to revise my thinking…

The book has been described as having a ‘noir-ish feel’, which to me was odd (as I always think of Elmore Leonard when I think of noir) but also strangely appropriate.  Do you think it’s an accurate description?

Funny, I hadn’t thought of it that way, but yes, I think it works. The author Wendy James describes her work as ‘suburban noir’ and it might fit in there. I hope the book crosses genres in some ways so I’d be happy for it to be described like that. The book has an undercurrent of darkness that permeates…

I noticed you slipped in a reference to Layla reading Murakami…  What sort of books were you reading when you were 14?  Do you think they influence you even to this day?

I wasn’t reading any Japanese writers (a shame) but I was a voracious reader. On my school hols my dad would buy me a pile of 10 books and I’d binge-read, happy as anything. My favourites were the US writers in teen fiction, Judy Blume, Robert Cormier, Paul Zindel, SE Hinton. Yes, these writers were focused on sex and occasionally bleak themes (with the odd strike of light and humour), so they have definitely influenced my first book. I still love to see them on my bookshelf.

Just_a_girl is your first book – what has it been like to see your ‘baby’ go out into the world (and did you ever read through the typeset pages and think ‘omg, I should have changed that!’ etc)

It has been both exhilarating and unnerving. It’s strange to let go of something you’ve worked for so many years on. I love hearing what other people think of it, especially when it’s struck a nerve. Even thought it’s written for adults, I’ll be very pleased when I hear a teenager’s opinion. I haven’t looked through the final copy as I don’t want to think about changing anything! I just like looking at the cover!

So now you’re published, do you have any words of wisdom for other young writers out there?

Write what you’re passionate about. Be resilient. Keep trying even if you get knocked back a few times. Learn to know which advice/criticism to take on. For the first draft, don’t look back. Just keep writing. Don’t think about it. Plenty of time to do that in future drafts.

Well, folks, that’s the end of Kirsten’s interview – thanks, Kirsten, for being such a lovely guest, and good luck with the book!  If you’d like to come to the launch of just_a_girl here in Castlemaine, come along to Lot 19 on Saturday 13 July, 5-7pm.  Ask a local for directions!  (or tweet me, because I’m going, so I can point you the way)

And if you’d like to read just_a_girl, copies are available from Stoneman’s Bookroom in Castlemaine, various bookstores around the country, or online (paperback or ebook) from UWA Publishing.

Finally, before I go, a couple of VITAL things.  The next few weeks are going to be incredibly busy, because everything is happening at once, it seems.  But I do need to mention –

* I went to Angela Savage’s book launch for The Dying Beach!! 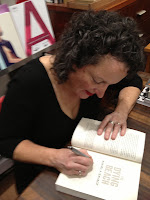 Here's the author, hard sloggin' it with the signings...

It was a fantastic night at Brunswick Bound, and if you’re a crime fan, go and grab a copy of this awesome novel featuring the hard-drinkin’ ever-lovin’ detective Jayne Keeney in Krabi (I’m hoping to hit Angela up for an interview some time when she’s not busy as a bee…).

* The winner of the Every Breath Cover Reveal Competition is about to go live!!  I’m pulling a name out of the hat this weekend, and I’ll post it up on Sunday.  Check out one of the sweet sweet prizes… 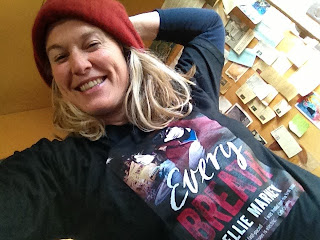 Yes, you get one of these, plus a copy of the book, so if you’ve been thinking you’d like to jump aboard, then – quick!  Go here right now and comment, or say hi on Facebook or Tweet me @elliemarney, for your last chance to win!

* If you’re a student at Castlemaine Secondary College, the Every Breath Review Comp starts on Tuesday 16 July – that’s next Tuesday! 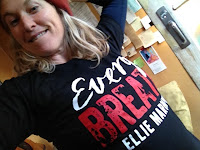 I know, I know, it’s sad to go back to school, but…Prizes!  Book copies!  Your name in lights!

If you’d like to enter the competition, go see your English Teacher and nominate to review the book – your review could be published online here, and in the Castlemaine Mail!!

* Last but not least – er, KOALAS IN OUR DRIVEWAY. 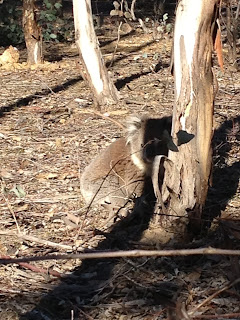 Well, not plural koalas, just one very lost-looking koala, who spooked the chickens when he/she wandered into our place on Wednesday…  The koala took a side trip into the study, so yes, I am writing in the very place that our koala friend peed (koalas get freaked out in confined places – who knew?).  Koalas – very fluffy ears, and totally weird.

That’s the round-up.  Hope you’re all having a good week, and talk to you again very soon J