Every Word overseas release! and making new ideas (is hard)

Every Word, the second book in the Every series, has been released this month in North America and the Philippines through Tundra Books/Penguin Random House – awesome J 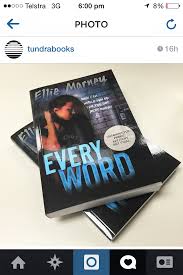 I’m pretty happy about that.  Early reviews have been coming in, and that’s been keeping me happy too.  If you’d like to read what people are saying, peruse below…

I’m also rapt to announce that Every Word has won the Best YA fiction award at this year’s Davitt Awards.  WOOT! 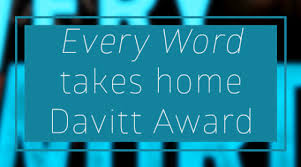 The Davitts, organised by Sisters in Crime (the Australian women crime writers association), has been running for 15 years, and this year, 96 books by female crime writers were up for consideration.  It’s a huge honour to be given the award, from a stellar line-up of shortlisted authors, and I’m incredibly grateful.

What else has been happening?  Well, these last two weeks I’ve been working up ideas for a new book project.  You would think that just ‘coming up with ideas’ is not a very labour-intensive job – it doesn’t sound as difficult or time-consuming as actually sitting down and writing an entire book.  In fact, to some extent, this is true: the me who’s ‘coming up with ideas’ actually bears a strong resemblance to the me who’s ‘washing dishes’ or ‘working in the garden’ or ‘going for a walk’.  But concept-generation is hard work.  I’ve discovered that it’s much harder work than writing.

Creating a new book is always a process.  I get a inspired by lots of things, but not everything I find inspiring is enough to hang a book on. Developing every idea takes mental effort, and involves looking inside yourself for something you can use in the writing.

Certainly looking inside is part of my role, as a writer.  But in the act of writing, only half of my role is in self-examination for some kind of ‘emotional depth charge’ (thank you for that phrase, Cate Kennedy) that resonates, that you know you can use to make readers resonate too.  The other fifty percent of actual writing is usually about regurgitating my observations.  I spend a lot of time observing the way people look and behave, the conversations they have, how their ways of thinking are inscribed on the ways they interact.  Those are the details I borrow from life and cannibalise to make an imaginary person or situation real.

I find that kind of self-examination exhausting, but it generates ideas.  Quite often, these ideas are hard won – I have to wrest my idea out of a quagmire of ‘that’s too embarrassing to write about’, or ‘oh, that’s too personal! Too revealing!’, and so on.  And so I am invested in each idea, as it emerges – blinking, uncurling its damp wings – and I think each of them is beautiful.

I would like to write ALL of them.  But I probably won’t.  Sure, I’d like to think that each of these ideas has promise, potential to be a whole book – like I said, you can make a book out of almost anything.  You can make a book about encyclopedia salesmen, or someone doing their laundry: it’s all in how the characters act, the hidden secrets and trauma inside every person, and where those secrets take them.  But I need to narrow down my options.  I want to write something that resonates both for me and for readers, something that other people will find interesting, something that has some broad appeal (broader than just an audience of one – me – at any rate).

So I think I’ve come up with something, something new and interesting – I mean, I hope it’s interesting – and I’m about to embark on the process of letting the characters take over.  I’ll be thinking, living and breathing the characters and concepts over the next few months, slowly giving in to them as they start to come alive and talk to each other, while I note everything down.  I’ll be filling up exercise books with scribbled research and scraps of dialogue, making boards on Pinterest, tearing out pictures and sticky-taping them up on my study wall, talking to people who might be able to help me out with the character development or the plotlines.

It’s an exciting time!  Also a strangely nervous time, as I wait to see if I can really make the concept come to life.  So…I guess I’m asking you to wish me luck?  And I hope you’re going well.  It’s school holiday time here, blowing in with the spring winds, which I s’pose is as good a time to start something new as any.  If it’s not spring where you are, I hope you’re finding some tiny blooming thing to keep you happy.

Email ThisBlogThis!Share to TwitterShare to FacebookShare to Pinterest
Labels: Davitt Awards 2015, Every Word US, writing