Hi folks, I've been battling our WOEFUL - let me just repeat that, WOEFUL - internets for the last few days, but I'm finally able to tell you who won the Every Word giveaway, phew!

So without further ado...Elspeth La Morte, congratulations!  You've won the first prize of two signed books - Every Breath and brand spankin' new-Every Word, as well as a handy magnifying glass! (very useful at crime scenes).  Please contact me at elliemarney[at]gmail[dot]com with your mailing details, and I will send off your lovely package :)

And...because my kids couldn't stand the idea of only pulling one name out of the hat, they came up with the idea of a second prize!  Ha!  So...SA Jeffrey, you have won the consolation prize of an Every Word fridge magnet (it's very pretty), and badges and stickers.  Again, please contact me at the email above to receive your winnings!

Now I know it’s been a while since I had a friend over to visit for the YA Crime Report, but it's been darn hard - there just aren't enough people in the world writing YA Crime!  But I've been hankering for a visitor to share cuppas and cake with, so it’s with great delight that I introduce a good mate of mine, Angela Savage. 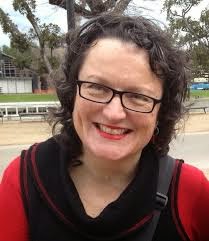 Angela writes crime for adults (which we won’t hold against her), but she’s been in the crime biz for a long time.  She won the 2004 Victorian Premier’s Literary Award for an unpublished manuscript for her first book, Behind the Night Bazaar.  She’s also won the Scarlet Stiletto Award, and been shortlisted twice for the Ned Kelly Awards, and her central character, Jayne Keeney, is a kickbutt detective.  Angela’s going to be standing up for me at the Every Word launch, as we send the next part of Rachel and Mycroft’s adventures out into the world, so I thought I’d like to introduce her!

Angela and I first got to know each other through Sisters in Crime, and through our similar experiences living and travelling in Asia for long periods of time.  She’s released three books – Behind the Night Bazaar, The Half Child, and most recently, The Dying Beach – featuring the cool, hard-drinking, Thai-speaking detective Jayne Keeney.  All of her books have an amazing sense of location, with lush gorgeous backdrops in Thailand, and an incredible understanding of local culture and custom.  Her books have a consistent theme of social justice, and plenty of action and wit to keep you furiously turning pages.

So please put your hands together for the lovely Angela Savage!!

Hi Angela, welcome to the blog!  How’s things going over your way?

Thanks Ellie. It’s great to be here. All’s well over my way. If I could just squeeze a few more hours out of every day, things would be perfect.

What was it – a book, a detective, an author – that first turned you on to crime writing?

I have to confess that I didn’t set out to write crime fiction. My first attempt at a novel was a thinly disguised autobiographical account of the adventures of a twenty-something Australian woman in Laos in the early 1990s. Big on textual detail but light on plot. I’d turned to short story writing as a way of honing my plotting skills, when a friend alerted me to the Sisters in Crime Scarlet Stiletto Awards. This was 1998 and I submitted a story called ‘The Mole on the Temple’ about an Australian expatriate PI based in Bangkok investigating a classic card swindle. The story won third prize, at which point I started thinking about writing crime fiction.

The more I thought about it, the more I realised crime was the perfect genre for the ideas I wanted to explore. Cultural misunderstandings are a rich vein for dramatic tension as well as humour, and working cross-culturally is a lot like being a detective. An outsider is always trying to figure out the big picture from a small set of clues, to distinguish a reliable source from one trying to take them for a ride, and searching for meanings lost in translation.

Besides, I’d always enjoyed reading crime fiction. Some of my favourite authors at the time – whose work I consider influential on my early efforts – include Sara Paretsky, Carol O’Connell, Michael Dibdin and Martin Cruz Smith.

Jayne is a great character – cool-headed, tough, intelligent, plus she can drink hard men under the table, and she has a passionate, justice-driven side.  I’m often asked if Rachel Watts, my character in the Every series, is anything like me, and the answer is always (has to be) ‘a little bit’.  So how much of Jayne is in you?

Hah! I actually wrote a post about whether Jayne Keeney and I would get along if we met. I know a lot of readers see Jayne as me (it was a mistake to give her black curly hair like mine but, at the time, I couldn’t imagine myself inside the head of a blonde). And we certainly have things in common – love of Southeast Asia, for example, as well as taste in crime fiction. But Jayne is less idealistic and much tougher than me.

How much research do you do for your novels?  Did you have to make another trip to Thailand to get the details right for The Dying Beach?

I do a lot of research for my novels. I read about Thai politics, culture, geography and language. I research technical aspects of crimes, too, such as whether a bottle would break when it connects with a skull (rarely) and how to assess whether someone has died from deliberate or accidental drowning (very difficult).

I’m also a firm believer in the value of field research. I first got the idea for the novel that became The Dying Beach while on holiday in Krabi in 2009, and I returned with the family in tow in 2011 expressly to do field research for the book. That my commitment to research requires me to travel to exotic tropical destinations is just one of many ways I suffer for my art.

Something I noticed about your books is that not only are your locations real, and the experiences of your detective, Jayne Keeney, authentic, but – just like real life – the resolutions of your stories aren’t always neat.  Things aren’t always resolved in a conventionally formulaic way, although justice is usually served.  Have you done that on purpose?  What other elements of the standard crime story do you like to play around with?

Great questions, Ellie. I like a degree of ambiguity in the books I read and I aim for that in what I write, too. And given the premise of an Australian expatriate working in Thailand, to my mind, there are simply too many obstacles, too many variables, to get away with neat or conventional resolutions.

I like the challenge of bending the rules of the genre, while also being aware that when you write crime fiction, you enter an unspoken pact with the reader to see that justice is served, one way or the other.

My first novel, Behind the Night Bazaar, is no whodunit: the reader knows the facts of the case early on – long before Jayne does, in fact. The suspense and drama come from the ‘whydunit’ and in finding out how justice will be served.

My second novel, The Half-Child, is more of a ‘howdunit’, while The Dying Beach is probably the closest thing I’ve written to a whodunit, complete with liberal red herrings.

I also enjoying playing with gender and cultural stereotypes. This is particularly the case in Jayne’s relationship with her business partner and lover, Rajiv Patel. She is the impulsive, obstinate, at times reckless one in the duo, Rajiv the reflective, cautious and considered partner – the Watson to her Holmes.

Who are your favourite crime authors, and why?

I like books that are political but not didactic, gripping but not gratuitous, with characters and scenarios that are credible but not predictable. Above all, I like good writing. Authors whose work meet these criteria for me include Megan Abbott, Kate Atkinson, Honey Brown, Raymond Chandler, Garry Disher, Wendy James, Adrian McKinty, Leigh Redhead and David Whish-Wilson.

Finally – and this is a bit of a self-serving question, I’ll admit! - can you tell us a little bit about the next Jayne Keeney story?  (have you thought that far ahead?) I confess I have a soft spot for Rajiv, Jayne’s boyfriend - will Jayne and Rajiv be able to sort things out, or is Jayne a bit too much woman for him to handle?

The next Jayne Keeney novel, tentatively titled A Tiger’s Heart, is set in Bangkok in 1997 during the financial crisis. I actually started writing this book after The Half-Child and got 30,000 words in before deciding this was not the third, but the fourth book in the series. So I set it aside and wrote The Dying Beach instead. Now to find the time to finish it…

Thanks so much for coming to visit Angela!  Can’t wait to see you again at the Every Word launch :)

Thanks for having me, Ellie. Special thanks for the honour of inviting me to launch your book.