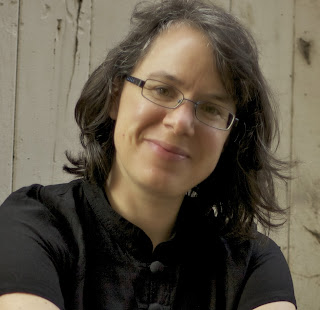 I first met Nansi Kunze at the Sisters In Crime women crime writer’s festival – SheKilda – in 2011.  We were sitting next to each other in the audience during one of the panel events.  I was there to see the launch of Scarlet Stiletto: The Second Cut, the SIC anthology that included my winning story ‘Tallow’ – I was high on the energy of all the women at the festival, and feeling the glow that comes from having something (anything!) published.

Nansi and I introduced ourselves, had a little chat.  I admit I was a bit awed – Nansi was a published author, with two books under her belt.  She talked about the juggle of family and writing life - her little boy was sick upstairs in the hotel, with her husband looking after him while she attended the panel.  She was on speed dial.  I talked about how I’d left my four kids at home with my husband for two days, and what a big deal it had been just to get out of the house and drive the two hours down to Melbourne to attend the festival.   We hit it off right away.

So I’m rapt to be introducing Nansi as today’s guest for the Crime Report.  Nansi’s previous books, Mishaps and Dangerously Placed, have had a definite whiff of the criminal about them too.  But her most recent book Kill The Music launches right into Nancy Drew-mystery territory. 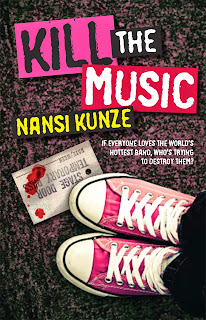 In Kill The Music, death threats against the world’s most famous boy band, Turmoil, have Lorna Powell gasping.  And it’s not because she’s a fan – Lorna is a reluctant band mascot while her brother, Flint, plays on stage with the rest of the guys.  Dragged from one glamorous location to the next, Lorna would like nothing more than a normal life.  But she’s not going to back down when the boys’ lives are at stake.  Lorna races to discover the killer…all while trying to figure out why lead singer Marius is acting weird, as well as keeping up with Turmoil, and getting her homework done on time.

Please give Nansi your warmest welcome!

Hey Nansi, so good to talk to you again!  How’s it going over your neck of the woods?

Hi Ellie – it’s great to be here! Things are going pretty well, thanks. We’ve been away for school holidays, so I’m about to get back to work on my new manuscript. I’m about half-way through the first draft, and I’m really looking forward to finishing it off.

So tell us a bit about your process.  Once you’ve got an idea (or two, or three), how do you go about working it up?

I’m a major planner (which is another way of saying I’m a bit of a control freak about my writing!). When I come up with a basic concept for a novel, I write down a ton of things longhand in my planning book before I get anywhere near the computer. I usually start with a fairly detailed outline of the first scene, some basic information about my main characters and a plot summary. After that I spend pages and pages scribbling stuff about the themes and development I want the book to have, as well as one-liners and ridiculous situations I want to include. Only when I’ve got a pretty solid idea of what’s going to be in it do I let myself start typing the actual manuscript! Even then, I stop every chapter – sometimes more often – to plan what’s coming up next in close detail before I go on.

Now tell us about Kill the Music.  In the book, Lorna gives us a wry glimpse into the world of super boy-bands – I couldn’t help but think that this is what it would be like on tour with One Direction!  What gave you the idea, and how did you research it?

It sounds a bit ridiculous to use the old ‘It came to me in a dream!’ explanation, but this one really did: one night I dreamt that I was the manager of a boy-band, and the boys were so irresponsible I couldn’t even trust them to cross the road without getting themselves run over! I thought it was a fun idea, and while I was writing the initial outline for the book I realised that Turmoil, the four-member rock outfit who’d had a bit part in my first novel, Mishaps, would be perfect for it. A lot of the material I needed came from my own experiences: things like starting at a new school (I went to eight different schools in the UK and Australia), hanging out at gigs and rehearsals (my parents are musicians) and speaking German and Japanese (I taught foreign languages before I became a novelist). Some other parts, like the physics and technological elements of the plot, were just fortuitous finds gleaned from many hours on the internet!

Lorna is a great character – she has a dry sense of humour, she’s tenacious and loyal, and she has an old-fashioned integrity.  Was she the easiest character to write?  And did she pop into your head like that, fully formed?

I’m glad you liked her! I realised as soon as I had the book concept that Lorna needed to be strong, loyal and affectionate – despite being somewhat contemptuous of what Turmoil get up to – and that she had to be able to kick butt. So I had a pretty good picture of her from the beginning. I usually find that it’s the outrageous secondary characters who are easiest to write, but Lorna was easier than the protagonists in my previous books because she’s got so much of me in her, like her lack of tact and tendency to make scathing remarks. I just wish I had her martial arts skills too!

The locations in Kill The Music are gorgeous, and give the book a cosmopolitan jet-setting allure.  Japan, Vienna…are these all places you’ve been?

Yes! I’m lucky enough to have travelled to all the places mentioned in the book, except the fictitious island in the Great Barrier Reef where Turmoil hold a party. It’s based on Double Island, north of Cairns, which I’ve often seen from the mainland and wanted to visit, but you have to rent the entire island – a little out of my price range! I absolutely loved being able to include some of my favourite travel destinations in Kill the Music, and I plan on putting some more of them into my next books.

What sort of detective mysteries draw you as a reader?  And were you an early aficionado of crime?

For me, mysteries are all about character. While I love an intricately-crafted plot and clever twists, if the characters aren’t fascinating in themselves, I don’t think any plot can make up for that. An early aficionado of crime? You know, I wouldn’t have said so. Actually, when I was invited to speak at SheKilda I was kind of surprised, because I hadn’t thought of myself as a crime writer up until then – even though Dangerously Placed was technically a murder mystery! But since then I’ve realised that I did read quite a lot of crime novels as a child. The ones that have really stayed with me are the ones with the most convincingly-drawn and charismatic characters, like Ellis Peters’s Cadfael and (of course) the superlative and ever-engaging Holmes.

Teen sleuths – they seem to be popping up all over the place lately!  What do you think makes teenagers good detectives?

One of the awesome things about teenagers is that they’re old enough to be capable of the tasks investigating a mystery might require; a teen sleuth can plausibly follow suspects over long distances, go undercover while at work, and even get into places children aren’t allowed to be. At the same time, teenagers are often underestimated or overlooked by adults, so they’re in a unique position to find things out. More importantly, though, a teenage detective can look at a situation with an open-mindedness, idealism and willingness to challenge the status quo that a jaded middle-aged detective might lack.

And finally, how do you unwind at the end of a long writing day? (Are there any of Lorna’s luxuries that you envy?)

I love curling up with a good book … like all writers, I expect! Gaming is my other favourite form of unwinding, and I always look forward to a bit of time with my 3DS. I don’t envy most of Lorna’s luxuries – like her, I prefer the quiet life – but I must admit, I wouldn’t mind spending a day checking out the bakeries and eco-boutiques of Vienna like she does!

Nansi, thank you for being such a good sport and answering my questions J  If you’d like to watch the cool trailer for Kill the Music, go here – or if you’d like to read the book, you can buy it in all good book stores, or maybe drop in here.   Get in touch with Nansi at her website, or on Twitter.

Now before I pull the pin, here’s a couple of events coming up that you may like to know about:

* The Every Breath giveaway over on Goodreads is about to finish.  I’m giving away three signed copies, open internationally, and it’s all over red rover on 31 October -  if you’d like to put your name into the hat (and an astonishing number of people have already done so, thank you!) dropover to Goodreads here and put your name down to win. (Or, you know, just go over to the sidebar and click)

* I’m talking on a panel!  Ooh, it is going to be very exciting…  It’s for a Sisters In Crime event, and it will be me, Kathryn Ledson (Rough Diamond) and Jaye Ford (Blood Secret, Scared Yet?) talking about female protagonists dealing with danger, and how to make crime fiction sparkle.  If you’d like to come along, you’re quite welcome!  We’ll be at the Rising Sun Hotel, South Melbourne, at 8pm on Friday 25 October – for more details go tothe Sisters in Crime website.

* I’m also going to be visiting the Mechanics Institute in Ballarat on Thursday 7 November at 7.30pm, to talk at a Ballarat Writers Inc event.  I’ll be talking about process, getting published, and why YA writing is the best (I just added that bit in).  Come along if you’re around, and have a cuppa and say hi.

Have a good week, stay sane, and see you again soon.